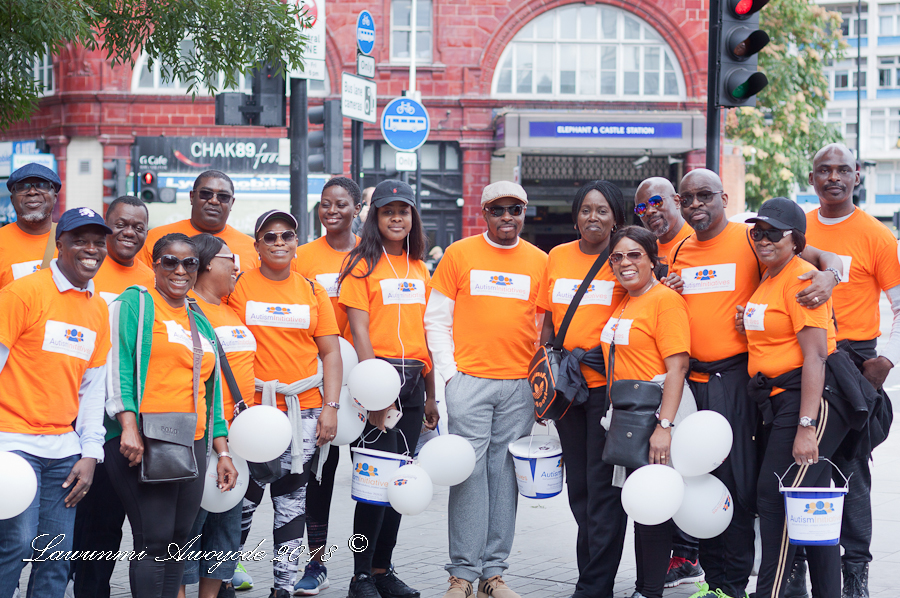 It seemed like yesterday since we completed our inaugural 10k walk to raise funds for the Sickle Cell Society UK as part of the VIN club annual charity events calendar. Well, it was time again to dust off the walking shoes, hit the gym and start exercise regimes to get ready for this year’s walk scheduled for 15th September.

As per normal, we as a club had deliberated on a choice of good causes to support and raise funds for and eventually decided to support the Autism Initiatives UK charity (a UK based charity that specialises in helping to support people with autism and their families) and also to raise awareness of the condition especially among the Afro-Caribbean community both in the UK and back in Nigeria.

The walk distance was the same as last year (10k from Greenwich Pier to Trafalgar Square), but this year, we decided to vary the route slightly and decided to go via Elephant and Castle. We again set up a Just Giving page for donations straight to the Autism Initiatives charity and set a target of £5,000 for members of the public to sponsor us for the walk.

Last year’s walk was thoroughly enjoyable, so there wasn’t much fear and trepidation as was felt before last year’s walk. We were all looking forward to it.

The day finally arrived and we (members, their wives and guests who joined us for the walk) started to arrive at the start point from 09:15AM for a 10:00AM start. The sun was out and the weather forecast was for a fine day. This time around, we had T-shirts sent to us by Autism Initiatives to wear on the walk. The shirts were bright orange and had their logo on both the front and the back, this really stood out and people were able to identify straightaway what we were walking in aid of, without even needing to ask. This was very effective as compared to last year, when we only had our VIN club T-Shirts on…

So, we blew up the balloons sent to us by the charity, tied them with strings, those who needed to stretch, stretched as our resident VIN club photographer snapped away to capture the memories.

Once we were all ready, we moved to the start point on Thames path, the president gave a short speech and at 10:33AM, we were off!

As every organisation that wants to grow better does, we had some “lessons learnt” from feedbacks of the first walk and one of these was that we needed to carry sealed donation buckets from the charity with their logo so that we could raise further funds during the walk. Pleased as punch to say that this was really effective for raising funds during the walk. People gave generously when approached and it was a joy to see people giving so generously. I must add here that those with the buckets found themselves to be natural fund-raisers especially the ladies amongst us. Some of the buckets at the end of the day were quite heavy, it was unbelievable that people gave so much, but for every penny donated, it was received with smiles and a big THANK YOU!

As usual, the atmosphere of camaraderie and sense of pride in doing the walk diminished any sense of tiredness that we may have felt. The walk did take about 4hrs to complete because it was not just a walk, but a walk and fund raising rolled in one meaning that we approached people and went into shops etc which inevitably slowed us down, but the extra time as compared to last year was thoroughly worth it as we raised considerably far more than last year.

We had been walking and raising funds now for about 4hrs and 12 kilometres when we stopped at the lions of Trafalgar Square. We took more pictures, the president of the club gave a thank you speech and just like last year, we went to Nando’s restaurant to have a well-deserved late lunch!!

So here’s saying a very big Thank you and Well Done to all who took part including the VIN club members’ wives and friends who joined us on the VIN club 2018 10(12k) walk!! And we say bring on the 2019 walk!